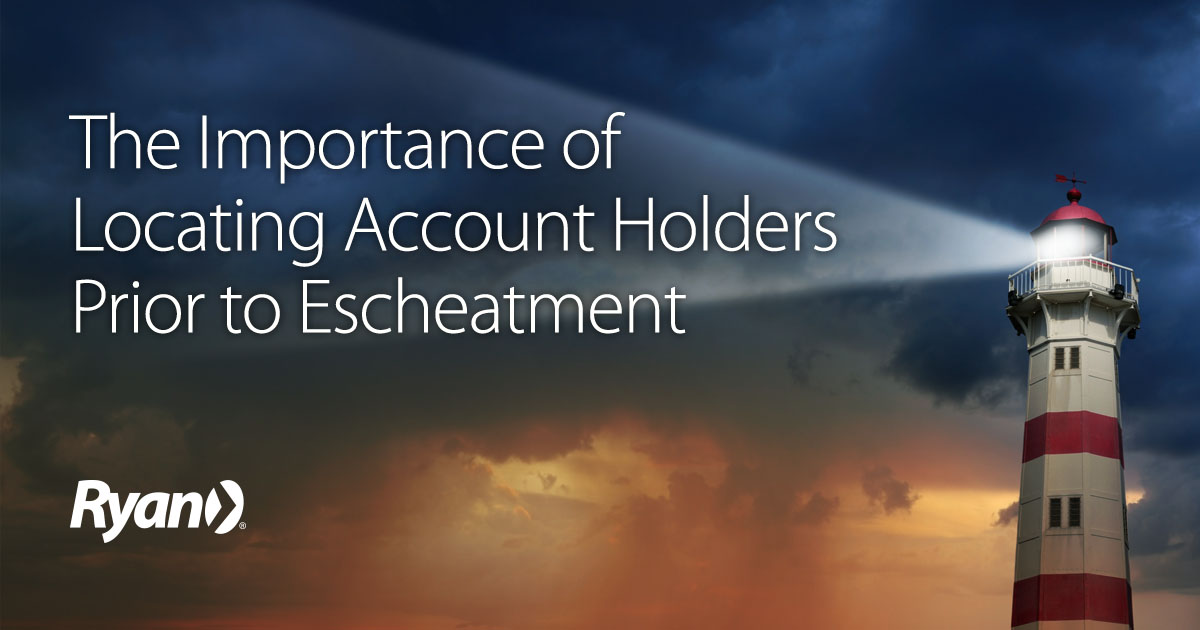 By: Kevin Hartman, Search and Location

No one goes to school to learn about unclaimed property. No university offers a major in escheatment. There is no Unclaimed Property 101 course. We in the industry just sort of ended up here, whether it was through a job opportunity or filling a need within a corporation or financial institution. If you ask people outside the industry what they think unclaimed property is, most will relate it to something along the lines of Storage Wars. Say the word “escheatment” to them, and they wonder if you are speaking a foreign language. Yet in the fiscal year of 2015 alone, states took in approximately $7.6 billion in unclaimed financial assets, with less than half of that being returned to the rightful owners. The state of California alone currently holds about $8 billion in financial unclaimed property. So how did something so few people know about become a multibillion-dollar source of state revenue?

Education is certainly part of the equation. Given that escheatment is something a large portion of the population knows nothing about, it’s much easier for accounts to become inactive and eventually end up with the state. If you don’t know what escheatment is, or what causes an account to become “lost” or “inactive,” or why that classifies your funds as escheatable, how are you supposed to be able to prevent it? It doesn’t stop at the general public either. As I said previously, most people who end up working in unclaimed property don’t normally come from a background in the industry. Some may have additional obligations within their organization that take precedence over that of the management of their inactive accounts. An uneducated public, coupled with those that are potentially only doing the bare minimum to satisfy their escheatment obligations, results in the states taking in copious amounts of money annually. And that is only dealing with the account holders who are still alive.

Unfortunately, death plays a large role in the world of financial unclaimed property. I’ll speak to you from personal experience in relation to this. In 2002, my grandfather passed away. He was from a small, old coal mining town in Western Pennsylvania. Needless to say, he wasn’t exactly a savvy investor. After his and my grandmother’s passing, my cousin bought their house. Six months later, letters began coming to the house in my grandfather’s name from an insurance company. My cousin routinely tossed them away as junk mail until one day he opened one, and inside was a check for a few bucks. He gave the check to my mother, the executrix to the estate, and after struggling to figure out things on her own, she gave everything to me. Turns out, my grandfather’s insurance company demutualized in 2000, and he received shares and dividends as a result. No one, including my grandfather, knew about the money. Luckily, I was working in the industry at the time, and we were able to recover the account for the estate prior to it escheating, which is the path it was on if my cousin’s curiosity hadn’t prevailed. This is not an uncommon occurrence. A large portion of financial assets that end up with the states are tied to a deceased account holder and/or the person’s estate. So often, the original holder of the account was unaware of existing funds and did not keep good investment records. This makes things increasingly difficult for the heirs or estate representatives to track down and reregister accounts prior to them escheating. The confusing process of documenting legal entitlement, before or after the account has escheated, only exacerbates the issue. All of this, coupled with the aggressive nature of state regulations, makes it more difficult for the rightful owners of the accounts to recover them and for corporations and financial institutions to be able to retain assets under management. So what can be done to help limit these types of issues and ultimately prevent accounts from escheating?

While it would be great to have one uniform process and time frame related to escheatment for all states and U.S. territories, this is far from the case. The rules, requirements, and timing of escheatment vary wildly from state to state. This creates the difficult process of understanding what account types are considered escheatable, and when and how each state wants to receive this information. Therefore, it is even more important for companies to do their best to locate their holders prior to escheatment. If you can routinely locate the rightful owners, then you drastically decrease the number of accounts that must go through the painful process of escheatment.

While searching for the holders will satisfy some of the due diligence requirements, searching alone just isn’t enough. Building a program, internally or through a third party, that engages holders and creates activity is key. Mail and phone campaigns used to establish contact and reset the clock on escheatment are essential. As our population has an ever-increasing reliance on technology to function on a day-to-day basis, companies should be using those tools to educate and locate their holders, via social media and email. Being able to limit or eliminate exposure to a lengthy and costly state audit can save companies a tremendous amount of time and money. In addition, locating the rightful owners to lost or inactive accounts keeps assets under management and prevents the animosity that can be created if an account unknowingly escheats out from under the account owner or his/her heirs.

The more we can do to locate, educate, and retain account holders, the easier it becomes to limit escheatment.